I’ve been podcasting since July 1st, 2007, and to say I’ve seen the medium grow and change is an understatement. The first episode of a podcast I ever recorded, for Happy Hour with Steel Tip—a show I started with my wrestling gimmick, was actually completely remote. I had my computer with Skype in Massachusetts, my co-host was in Levittown with his computer/Skype, and the producer in Philadelphia with (get ready for it):

And for the last few years, services like Zencastr have made remote podcasting incredibly easy.

A few weeks before my 13th anniversary of podcasting, I made the decision to take a step back from podcasting. I was feeling creatively frustrated, aimless, directionless, and lacking in motivation. More importantly, I was letting podcasting be a focal point in my life when it shouldn’t have been. After 13 years of not making too much forward progress—in fact, one could argue that I lost progress over the last 4 years—I was and am ready to set it to the side. Ironically, the last 4 years of podcasting have been the best years of my podcasting “career”; which proves when you do something for you, it’ll always be fun.

While I can’t say I’ll never podcast again, I can’t imagine I’ll be doing anything on a weekly basis (or even a regular basis) again. And I’ll certainly be open to guesting on any and every (so long as you/your show isn’t promoting any kind of hate) podcast if you’d have me.

Why depart a medium I love and praise? Well, I did kind of say why above, but I’m hoping what I get in return is a better quality of life. My mental health has been less than stellar and the events of 2020 have not helped. I think a piece of me has never fully recovered from losing my uncle… or maybe I have yet to grieve properly?

More importantly, at the age of 36, I’m hoping to be an adult. I often put fun before needs. Sometimes that’s the need for my mental health, but mostly just normal adult functions that I let go for far too long. There are other “sacrifices” I need to look at in that manner too, though they aren’t necessarily sacrifices as much as things I’m no longer allowing myself to put ahead of being an adult.

Other benefits I’m hoping comes from leaving podcasting behind is that I hope to focus on one or two personal projects at a time. I’ve often fallen victim to “let me do three podcasts, write a movie and a novel, while also balancing editing of ten other podcasts”. It’s been pointed out to me before that I try and do too many things at once and that I should pick something and go for it. As much as I love podcasting, I no longer feel like the rewards are worth the amount of work I put in to it (which, if I’m being honest, wasn’t actually a lot those final months—what does that say?).

On a final note, for anyone that may be reading this and thinking about starting a podcast—don’t let this dissuade you! Everyone should try and do a podcast at some point. The fact that I podcasted, as an independent podcaster that’s never earned a dime for it, for 13 years is not the norm. If you have something to say, podcasting is a great platform to do it—it’s also one of the easiest platforms. Don’t read this and think “oh, it’s not worth it”. It’s the opposite—the last four years of podcasting have been wonderful for me. I’ve done things I never thought I’d be able to do because of it. I’ve just said what I have to say… it’s time for someone else to juggle ten podcasts. It’s time for YOU to share your story. 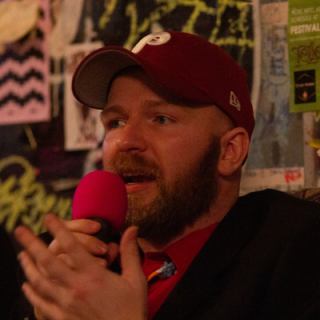 First and foremost, Kev is a dad to two wonderful children. He's also an uber Kevin Smith fan (all Smith's movies are worth a watch, even 'Yoga Hosers') who has cried during Kermit's monologue in 'The Muppets' and once owned two VHS copies 'Spice World'. He loves all pop culture, particularly the Berlantiverse (because 'Arrow' hasn't been the face of those CW shows for years), the MCU, and Star Wars. The Evil Dead franchise is his favorite horror franchise, though the original 'Scream' is his favorite scary movie. He bleeds Eagle's green in the (suburbs of the) greatest city on Earth, Philadelphia. Go Birds!

Hey Did You Know I Write Books

i can make a bigger bang than that, dear!

The World is in Your Hands